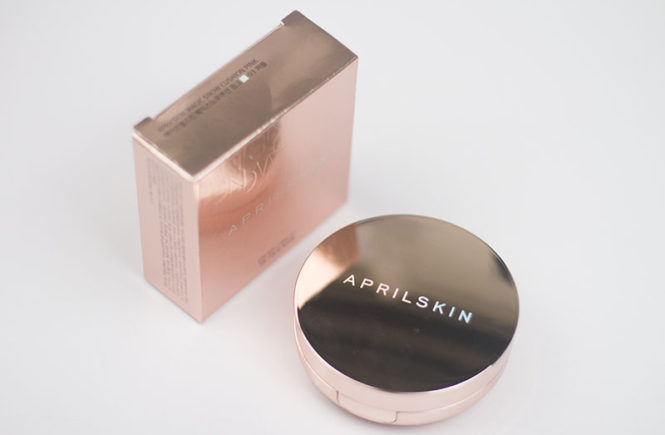 I hope everyone’s having a great weekend! I’ve been spending some time working out finances for my upcoming trip to Korea and… well, accidentally on purpose making some purchases on Gmarket. For now though, I’m going to restrain myself from spending for the next three weeks until I’m abroad. This is all the more reason to really dive into my reviews and talk about the wonderful things I’ve been trying lately. So, without further ado, here’s my review of April Skin’s Magic Snow Cushion Pink!

This is one of their new cushions (with a super improved packaging and logo design) and comes in four colours, three of which are colour correcting bases. I was really excited to try this and received it at the same time as the original cushion from StyleKorean. Compared to the white cushion, I definitely think that this rose gold case is a lot prettier and the holographic lettering is really eye-catching. 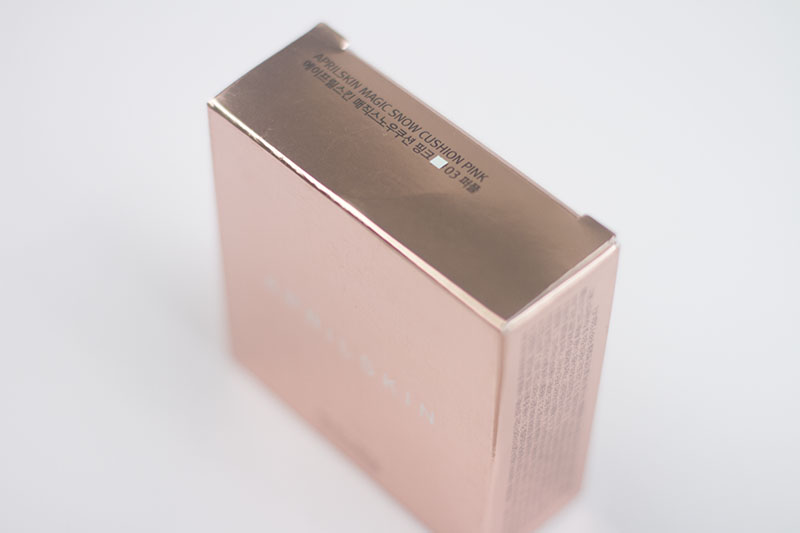 So I got this cushion in their 03 purple shade, which is meant to brighten up my overall skin tone. I’ll talk more about the different colours that they have later though because, first off, I want to talk about how ridiculously pretty this packaging is. I love that the design isn’t over the top and their logo (which has thankfully been refreshed since the original) now has a very modern, and maybe even high end feel. The rose gold finish is already really eye-catching, so I like that they’ve stepped back and allowed it to really ‘take the reigns’.

The box still has the same emboss print from before, so it’s nice that the two tie in. There is also a holographic sticker on the back which is meant to be for differentiating real April Skin products from fakes but, to be honest, these stickers are really easy to fake. I definitely recommend purchasing from a reliable seller or store since April Skin has become so popular recently that there are probably a lot of fakes out. 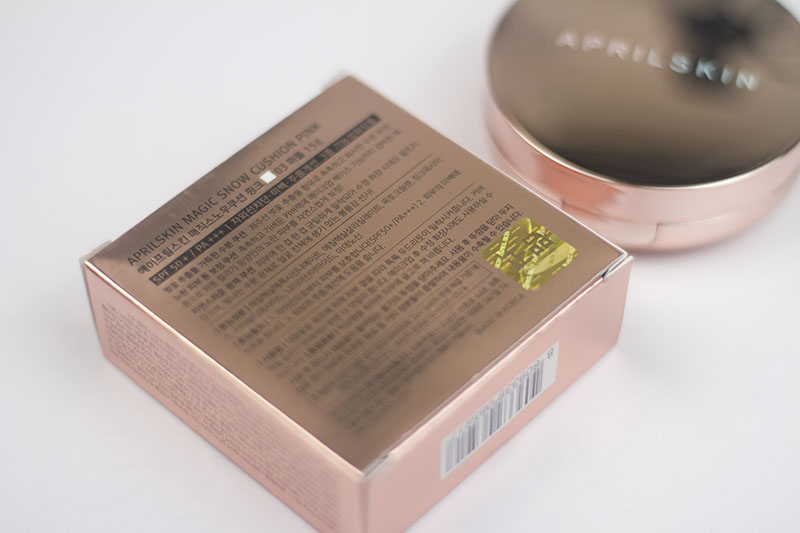 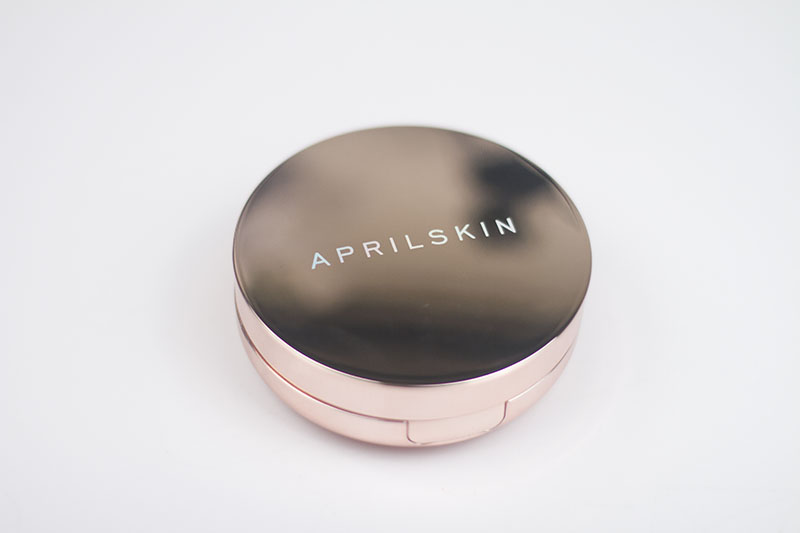 From what I can see, even though the two cushion cases look like they’re the same in shape from the outside, they actually very different and the refills are not interchangeable. This new case is pretty sturdy and the lid locks in nicely but, unlike the original, doesn’t really click when it’s closed and the cushion (or the ‘refill’) is actually a lot harder to get out. Overall, even though this new cushion case is a lot prettier, I think that I preferred the make of the original.

Both of them have the same foam-like cushion that pressed against the puff lid though – that was one thing I had hoped they would improve. Both have the same amount of product and SPF, so I would really consider them two different products, not just a ‘new cushion’. 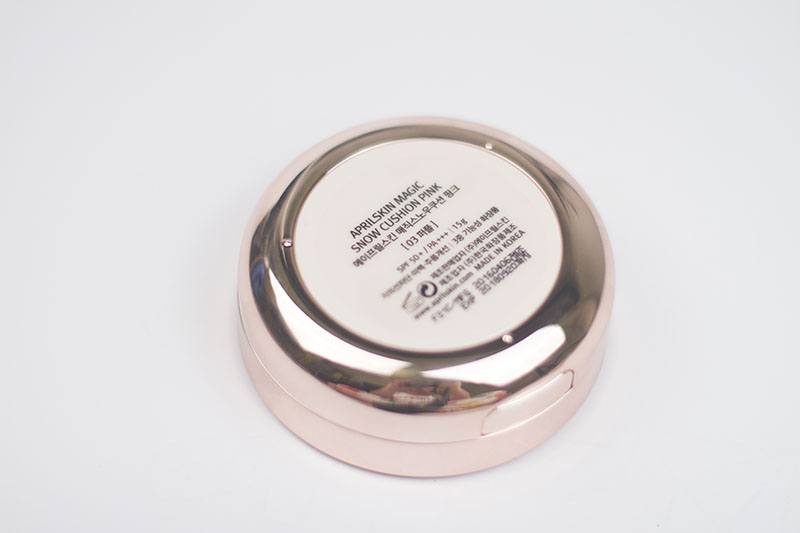 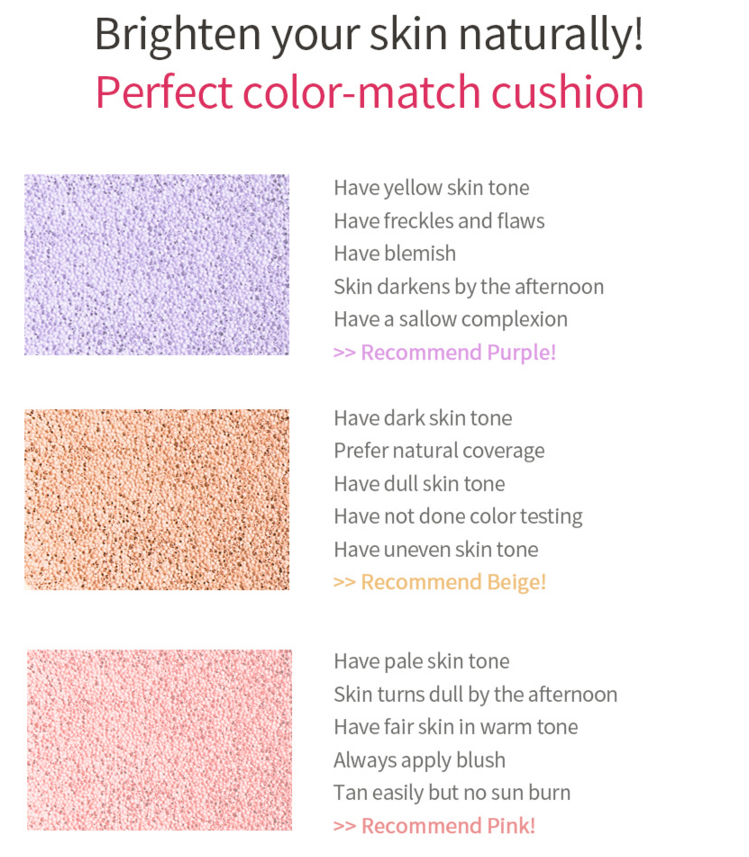 Those are the four colours that the cushion comes in! The beige is the most generic base tone, though I do think they should have released them as a normal BB cushion with proper shades. The others all target different types of skin correcting – Purple to correct yellow, sallow complexions; Pink for those with warm and fair skin tones; Green for those with a lot of redness and veins on their skin.

For myself, I tossed up between the purple and the pink as I often really like pink bases that can give me a cooler and paler complexion. However, since I really do have a lot of issues with yellowness and sallow skin, I opted for the purple. My skin issues tend to be a lot worse during periods where I’m not sleeping enough – this has been fairly common lately because of work and trying to prepare blog posts for when I’m away in Korea! 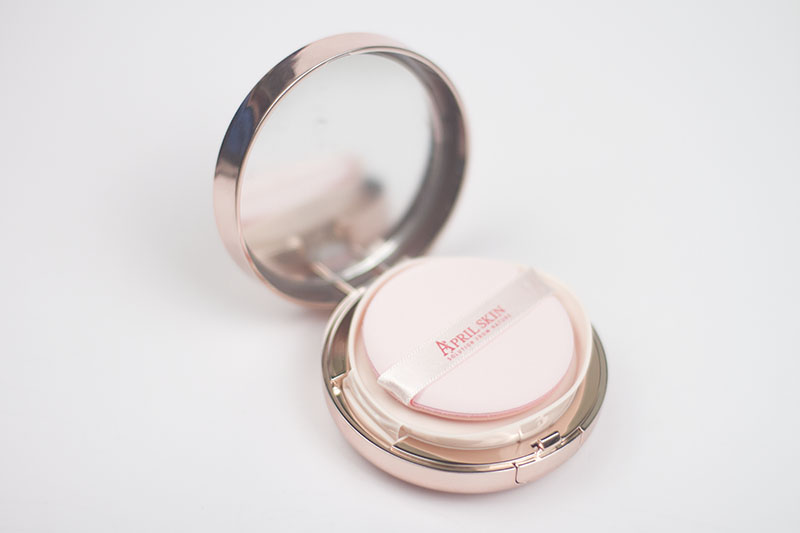 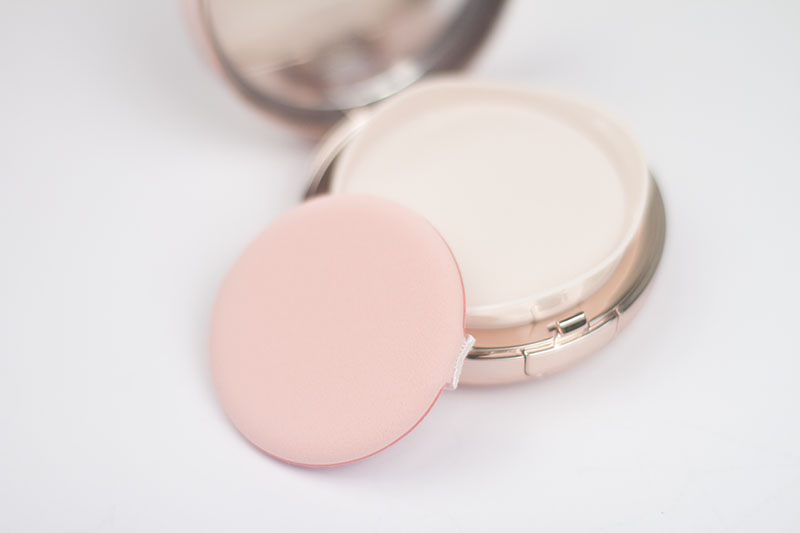 Compared to the original, this pink cushion sticks out more on top but also has a more sleek look – I’m not sure if this is because of the metallic finish or because of the shape. It comes with a pink puff cushion which is really cute; it seems to be pretty much the same as the original though which was also good. I have no issues with it here – the applicator is soft and easy to use.

The product is protected with the usual sticker. In some Youtube videos (well, in Liah Yoo’s) she noticed a oily surface on the top of her puff lid and her protective sticker had come off. I didn’t have this issue though and the cushion was very appropriately sealed for me. The mirror is also a good size to use for touch ups. 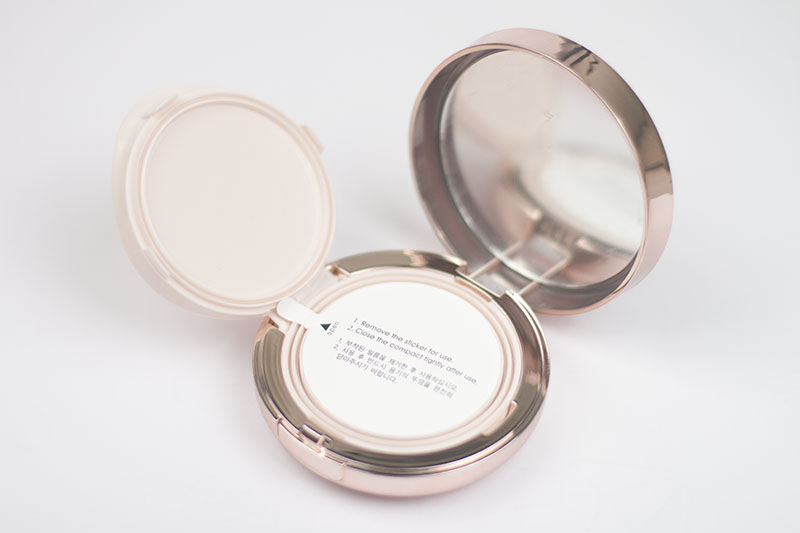 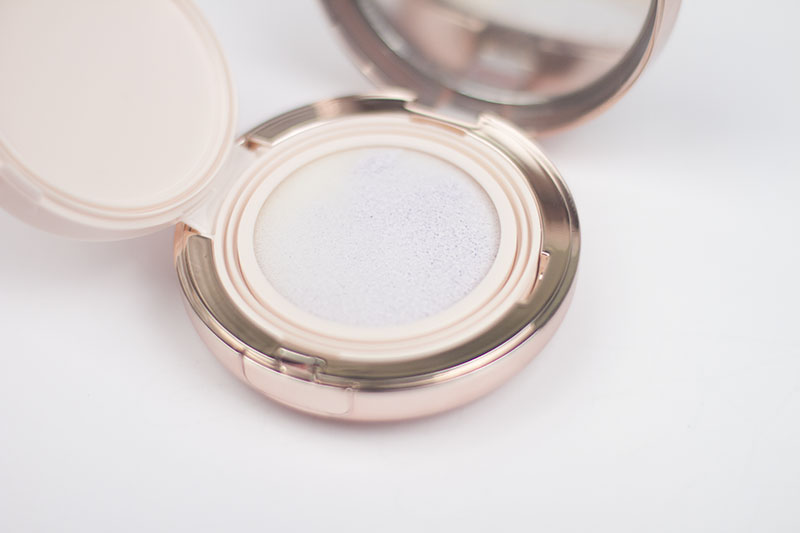 And there’s the sponge! I’ve been using the cushion really often and I still can’t seem to get the product to be evenly distributed throughout – the same problem I was having with the original. The product definitely doesn’t dispense as evenly and the sponge is also slightly raised, making it smear against the top. I really hope that April Skin improves on this in their next product. It is the first time I’ve seen this sort of quality of a BB cushion and I personally don’t think it works very well.

Nevertheless, since the cushion is still pretty full, the product filled my sponge. You can see that it is really quite purple. The product doesn’t really have much coverage when it comes to blemishes, but is really effective in evening out my skintone. As you can see in the swatch below, the results are obvious. Because of the sheer formula, you can definitely put on a few layers of this product (I usually do 2 – 3 targeting different areas) and it won’t be cakey.

The finish is a little bit dewy though still quite natural – I personally really like it. 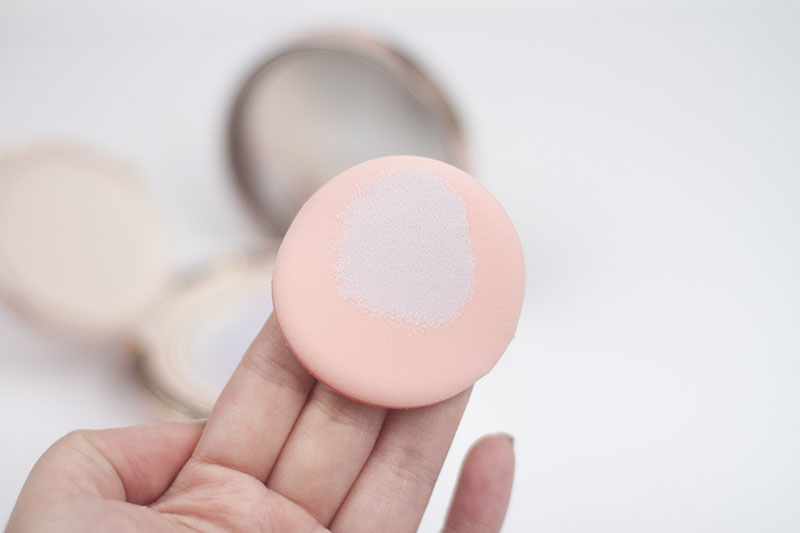 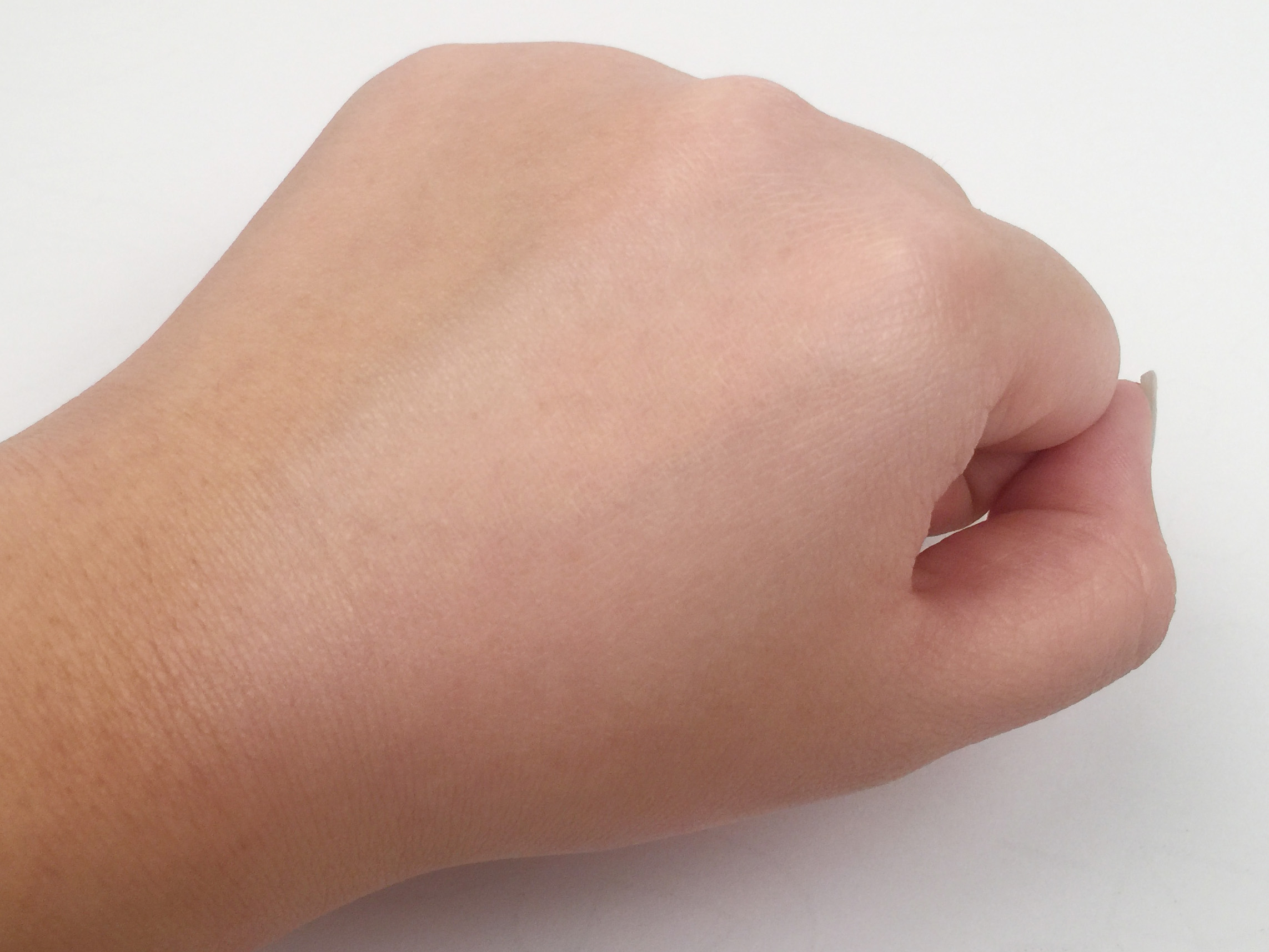 I’ve been using this cushion a lot more than I usually do! At first, I used my 3CE White Milk cushion quite a lot as a corrector but I actually prefer this one by April Skin. I think it’s more buildable and the formula is easy to blend as well. With the 3CE cushion I would usually use it with a BB cream on top but, for this one, I prefer to apply a few very light layers all over my face and then apply a higher coverage cushion (I’ve been using the April Skin Magic Snow Cushion) only in areas that need it.

Both of the products blend together seamlessly to give me a finish that is both high coverage and natural by only covering what is needed. So what’s my verdict? Here it goes!

Although there are quite a few negatives to this cushion, I think that their formula really does work well and has a nice finish so I’m very inclined to come back to it when I finish this one. In the future, I would also be interested in trying out their pink and beige cushion – mostly because I really want to know why they thought only one beige tone was needed. It’s also really pretty, let’s be real.

If you have amazing skin, then you really can just use this product by itself. otherwise, applying BB cream or concealer only in places where it’s needed will really help create a more natural finish – this is especially good or going to work or on early mornings when you don’t want to spend too much time covering up. As a habit, I usually do end up applying to my entire face, but I will often judge how heavy handed I have to be depending on my skin’s condition.

The April Skin Magic Snow Cushion Pink is currently on sale at StyleKorean for USD$22.24 – 30% off the full price of USD$31.78. Click their name to go to their homepage or, alternatively, click the below banner to go straight to the product page: 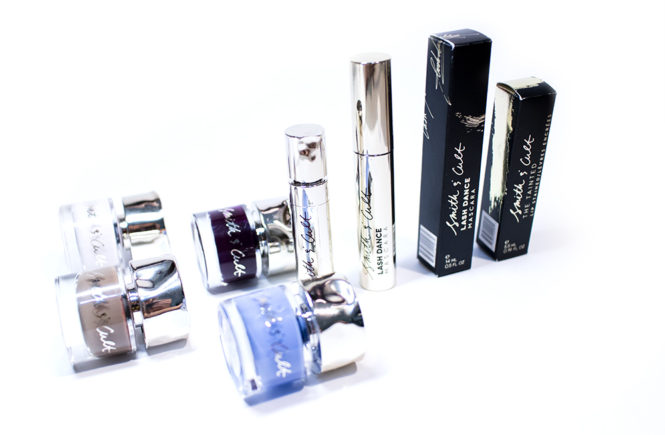 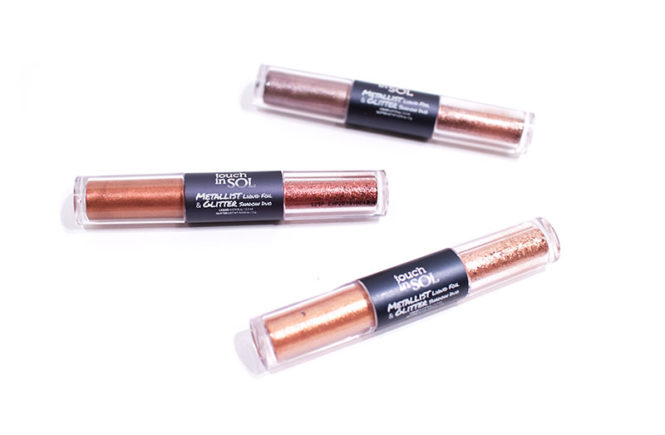 Omg have you seen the new @maccosmetics x @kakaofr