I used to use gel liners almost exclusively, but it’s in the past couple of years that I had completely switched over to liquid pen liners – which I preferred for getting very crisp black lines. It has actually been quite a while since I used a gel so, when I received these Gel Eyeliner Pencils from Esqido, I knew that there would be a bit of  a learning curve for me. Still, I think that there will always be a place in my collection for gel liners as they can give you that deep, smokey look that is hard to achieve with liquids.

These are a new addition to Esqido’s offerings which, in the past, has been focused on their false lashes and companion glue. Bringing out these liners feels so natural though, because they’re perfect for the waterline for smoking out the lash, so this development didn’t surprise me at all!

I was sent these to review in both colours – black and brown – and they claim to be super budge proof and also waterproof; which I tested out very easily with my watery eyes. So, read on for my review because these have definitely impressed me and I think that I will be using these Gel Eyeliners more in the future. 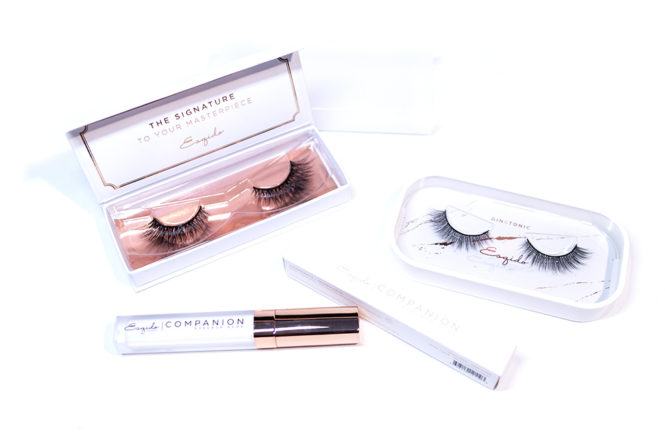 This post is going to be a little different for me because, instead of talking about make up or skincare, I’m going to be showing up the false lashes and eyelash glue that I was sent to test from a brand called Esqido! For those that know me in real life, they will know that I don’t actually wear false lashes that often – that because I have rather small eyes and they will generally take me at least a half hour to get on. However, I was really excited when Esqido reached out to me, partly because their designs look so beautiful and fluttery, and also partly because they have a massive celebrity clientele! I’m talking Rihanna, Naya Rivera and Shay Mitchell (whose lashes I have always envied) – along with a long list of influencers too. They have also been worn by Arden Cho and, seeing that they work so naturally on her eyes too, I was super keen to give this a try.

I originally chose these false lashes through the Esqido Lash Guide, which is an interactive quiz that helps you to choose the perfect lashes for your eyes. I was originally recommended Gin & Tonic (Unisyn™), as well as Silhouette (Mink), but since the latter was out of stock I decided to try out an alternative style – Mystic (Mink). They’re both quite dramatic lashes, so I was curious about how I would go ahead with these but I’m pleased to say that I’m very happy with the results! In addition, Esqido also sent me their Companion Eyelash Glue, which worked well for me and help the lashes to my eyes very firmly.

And that’s all for my introduction! Instead, let’s jump into my spotlight of each individual product because there’s a lot of information that I want to share (and these products make really pretty pictures). I originally wanted to write this as a full blown review for each individual product, but I think that it will be better to give my thoughts and observations, and then share photos of the application, because I feel like lashes can be such a personal thing that it’s hard to rate.