I don’t review Etude House products very often on my blog, mostly because I find their brand a bit of a hit-or-miss. Some things work really well for me and others leave me rather disappointed. One thing that I have to say though, is that they’re really great at the packaging game and so all of their limited edition collections and special releases are something to anticipate. I was really excited when I went into a store in Seoul and, not only did I get to check out the collection, but they were also having a sale where the whole Universe Holiday Collection was on sale! Of course, I wanted to grab everything but, in lieu of going totally crazy, I got one of the palettes (which I was already eying) and two of the lipsticks (which I’ll talk about at a later date).

The following is called the Multi Palette and contains six shadows (both matte and glitters) and a highlighter. It comes in two different collections – Pinky Galaxy (cool toned) and Golden Galaxy (warm toned). As most people are aware, I usually gravitate heavily towards the more cool toned palettes and I did check it out first, but I ended up getting Golden Galaxy instead because the colours seemed to swatch more pigmented and creamy.

From my previous experience, Etude House eyeshadows can also be a hit-or-miss. Some of them are pretty decent! In fact, there used to be this one pink single shadow from them that I used daily and stocked up on too. However, their formulas seem to lack consistency and so there are some shadows that are really lacking in pigmentation (and by that, I mean that I have some pans where I can’t even pick up any colour).

So, let me talk about this product in depth and give you my thoughts of every individual shade. 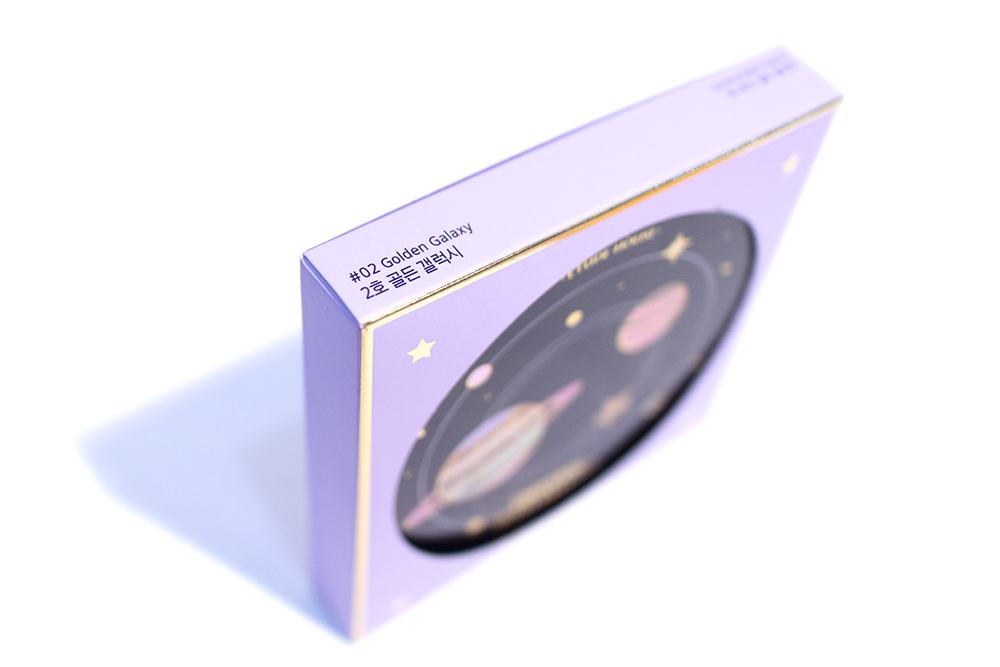 So the palette comes in a purple box that fully shows off the beautiful galaxy design of the palette. It’s really nicely designed – ornate and girly (which makes sense since Etude House is generally targeted to a younger female audience) and is a perfect product as their holiday collection! I think that this would look really great as a gift and, personally, I’d be pretty excited by it. I think that I would prefer if they did a standard box without the window though. I’m very pedantic about keeping my products clean and without scratches, so I’d hate if I bought something that wasn’t in pristine condition.

The actual palette is pretty small, around the size of my hand, but this is generally to be expected of Korean eyeshadow palettes. They’re well priced, much more affordable than Western palettes, but are so much smaller. That being said, that also means that they’re good for carrying in bags for touch ups during the day – which I couldn’t imagine doing with my Naked palette.

This product has a round shape, most likely to tie in with the galaxy concept, and has a really pretty black and pastel design. The accent glitters on the front also look really great and, although the case seems a bit cheap – being a gloss plastic – it still looks pretty good! Overall, Etude House really wins with packaging anyway. 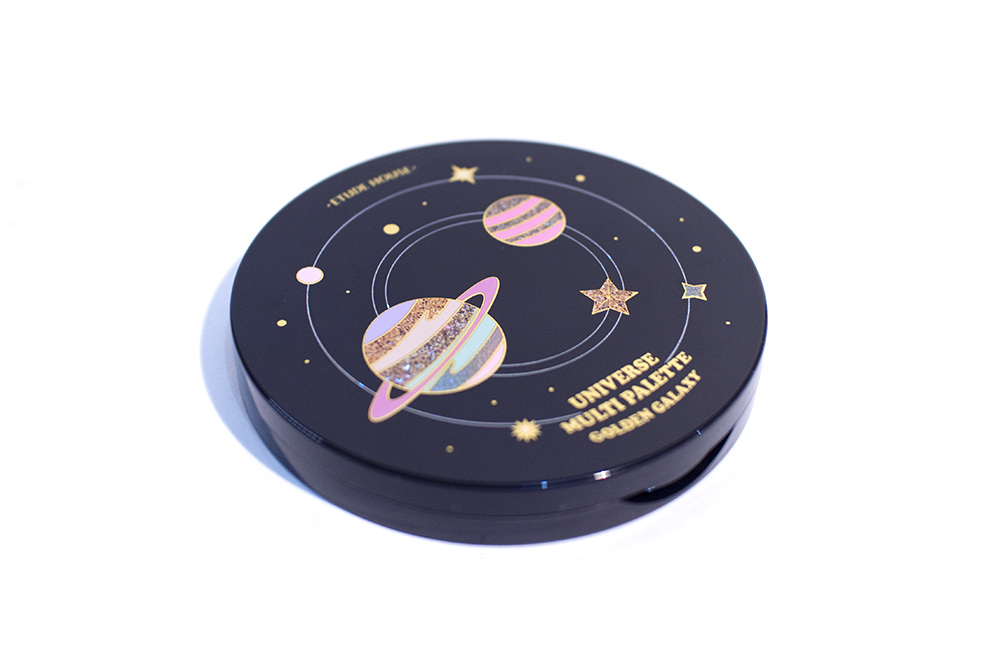 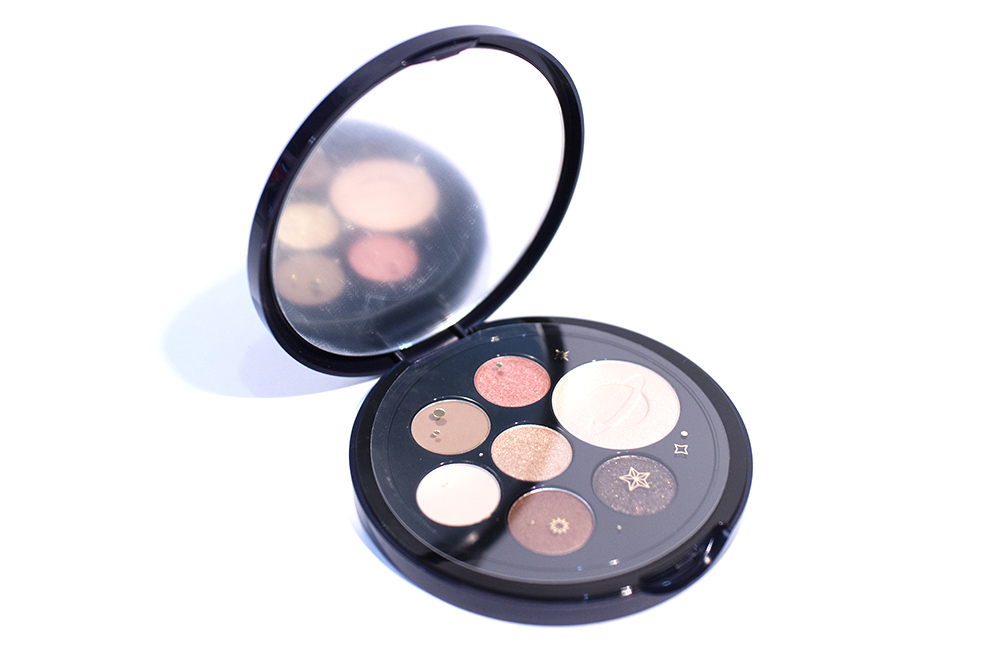 The palette opens up with a full sized mirror! This is always great with eyeshadows, especially if I take them on the go, because I can’t work with those tiny mirrors. I also like that it’s really simple and that there’s no design obstructing my view. Of course, the mirror is clean and crisp – it just looks faded in the photo there before I hadn’t ripped the plastic off of it yet. The mirror opens up to a full 180 degrees, which gives you a lot of flexibility in using the palette too. I really hate them they don’t open up properly.

The eyeshadow pans are workable, but they’re pretty small. They’re arranged with the two matte, base colours on the outer edge and the shimmers inside. There is a larger pan of the highlighting shade, which makes it a lot easier to work with. I also really like the small design details on this too – the stars on the plastic insert and the planet print on the highlighter pan looks great. 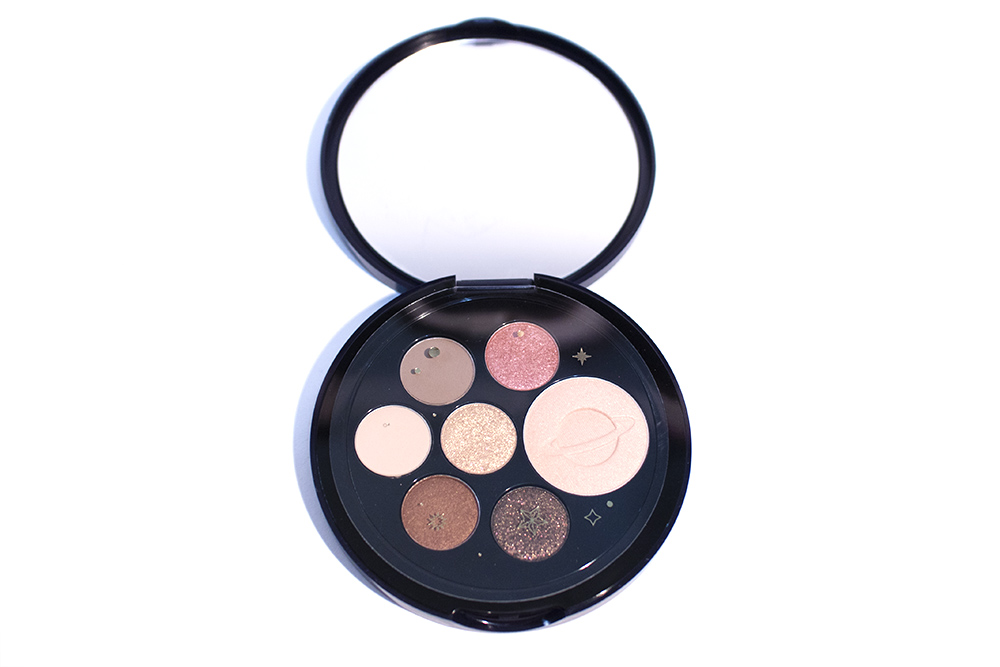 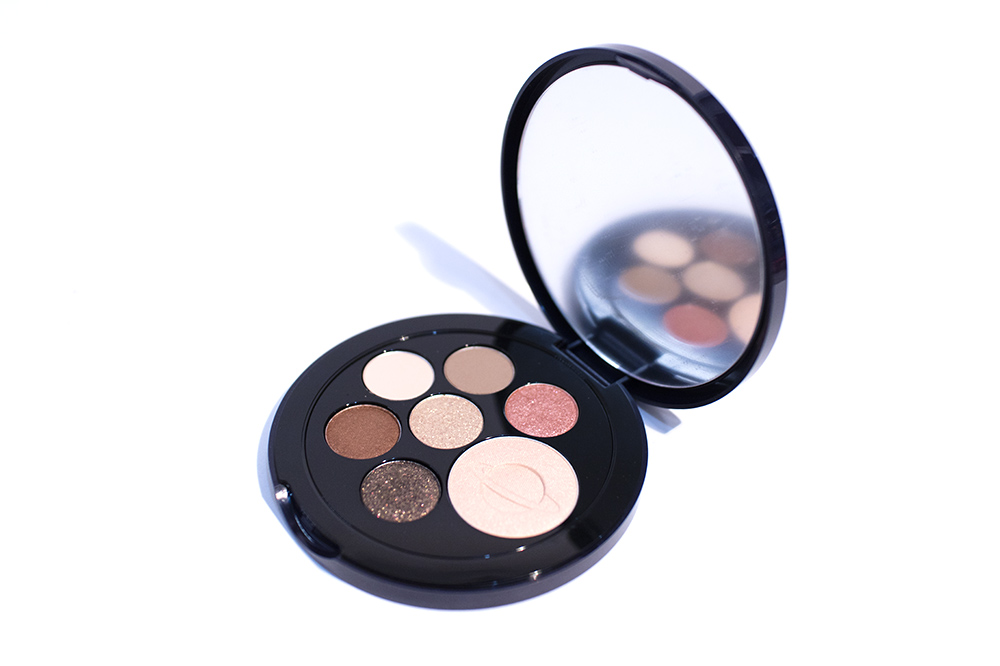 So here’s the shades that it comes in and my brief thoughts on them! Below, I also have swatches of the products. It’s important to note that these are finger swatches with no primer beneath, but my thoughts are based on how they applied on my eyes. 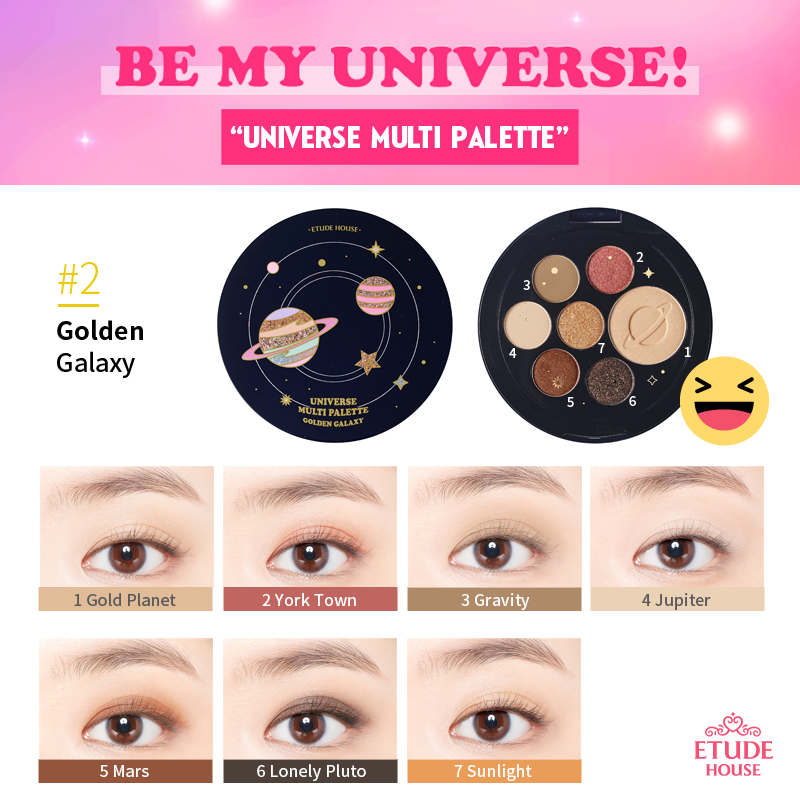 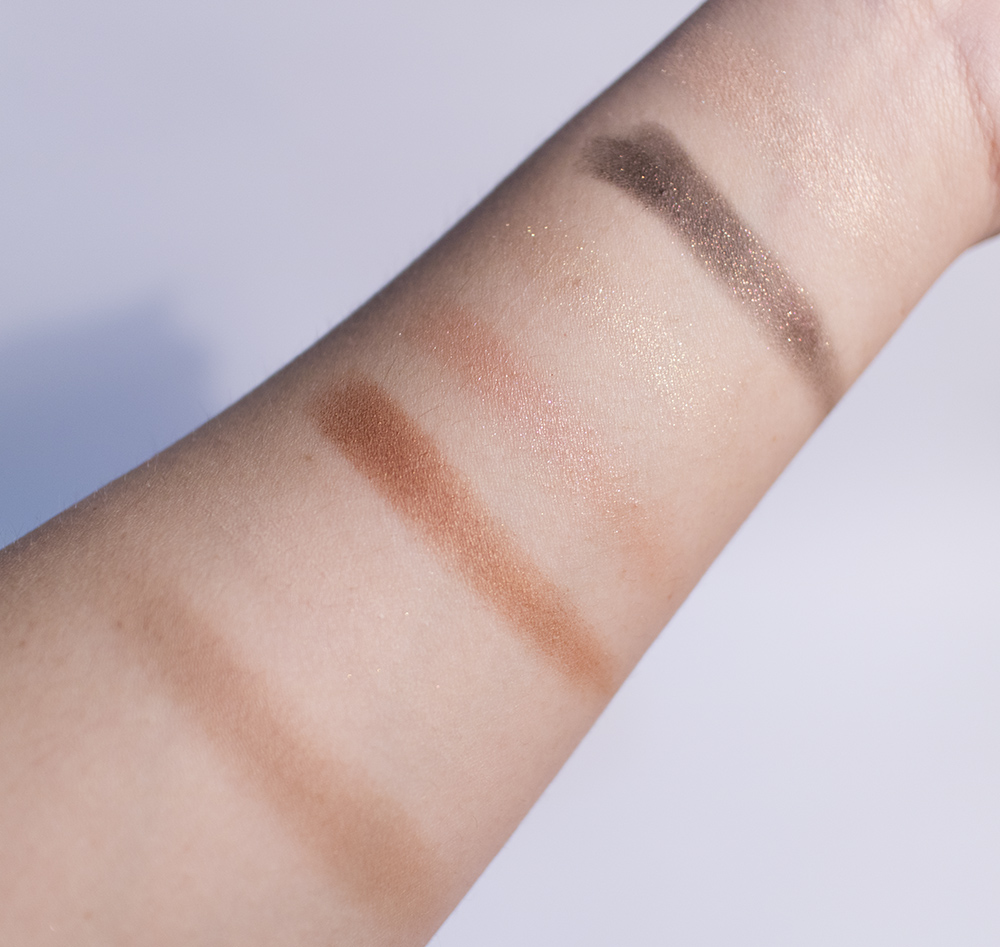 Overall, I really do love the packaging but the product leaves much to be desired. The glitters are subtle and sheer, requiring a primer (or glitter glue) just for it to show up properly, but the colours are pretty. It’s important to keep in mind that a lot of Etude House eyeshadows tend to be more sheer and lightly buildable because of the Korean trends – their eye make up leans more towards lighter and more natural looks, so their formulations reflect this. My main concern is when products don’t blend or pick up properly.

If you’re a fan of Korean eye make up then I think that you’d like this palette – if not only for the collectable nature of the limited edition package! If you’re more into bold eyes though, it might not be very suited for your style.

I’ll still use it but I don’t think that I would reach for it often. I would rather pay more for better formulated products that I don’t need to work so hard to make work.

So here’s the verdict!

A eyeshadow and highlighting palette

Personally, I won’t be recommending it. I think that there are better products and formulas out there; I would rather pay more for a better quality shadow palette. However, I know that there will be people (like me) who may buy this just for the packaging, or may like this sort of formulation, so I won’t fully condemn it.

WHERE TO GET IT?

I got mine at Etude House in Seoul, so the best place to find it would probably be the Etude House website! At the moment, I don’t know any other online stores selling it but please leave a comment below if you know of any and I’ll update this!