It has actually been so long since I received this product to try out and I’ve been putting off writing this review simply because it wasn’t terrible, but it also didn’t give me any marked results. I was planning on scrapping this review completely until I recently used the Red Serum again because of a massive break out that I was having after my Vietnam holiday – and, clearly, the results were enough to inspire me to write this.

This product is part of Medicube’s super hyped and popular Red Line – which is a specialised collection for acne prone skin. To be honest, I didn’t expect to see many results from their skin products only because I don’t usually have issues with acne. This situation was a rare care where I spent a few weeks in completely foreign weather conditions and only armed with my most basic skincare. The result was a really bad break out on my chin that stayed for weeks on end. I tried so many things to fix it but nothing did until this.

For a few days, I used this in conjunction with By Wishtrend TECA 1% Barrier Cream and already saw remarkable results. Another week or two and my break out (which I had struggled with for over a month) was virtually gone.

I actually thought that I had this review already written quite a while ago but it was only looking back in my drafts that I realised I hadn’t! If you think back a few months, Earlypicker had sent me a big package of products for review – most of these consisted of AprilSkin and Medicube. Although I had reviewed some of the main products, I seemed to have forgotten about this one! This is the Fixing Tint from AprilSkin and, contrary to the product name, it is more of a super matte lipstick than a tint.

This is one of the most long wearing lipsticks that I have ever worn on my life! It survived some of my most greasy eating dates – which included fries, fried chicken and frozen coke – and wore throughout the day without any transfer or smearing. As soon as I wore it, I had my friends asking me about the product and wanting to get one themselves.

However, it isn’t without it’s negatives and I certainly have mixed feelings about this product now that I’ve tried it out more. So, without further ado, lets move onto the review!

I honestly thought that I had already posted this review (especially since I’d been using this concealer so much) so I was surprised to find this still in my drafts! This is the Red Concealer by Medicube, which has been really popular online along with the Red Cushion (you can also check out my review of that) which went absolutely viral with their video. As per the rest of their line, these products – skincare and cosmetic – are targeted for sensitive and acne prone skin. They are non-comedogenic, so they will not clog pores, and they also boast a super high coverage that will help you cover up any of your insecurities so you are free to be your beautiful self.

Writing this review, I just want to take the chance to remind everyone that there is nothing wrong with acne, acne scarring or just having sensitive skin in general – it’s a part of life and, whether it is hormonal or you just genetically have more acne prone skin, it’s just a part of you and no one should have to feel that they need to cover up or hide themselves. Unfortunately though, I’m absolutely aware that it can make you feel very insecure and uncomfortable – because I had the same experiences in high school – so I’m personally really glad that companies like Medicube are focusing their attention on products that are not only effective, but also protective of our skin when it is in its more vulnerable state.

So I recieved this product to review from Earlypicker and I tested it together with the Red Cushion, as well as alone, and I actually like this concealer more than the cushion – although I didn’t dislike it either. I think that the coverage of this product is really great and it also wears well through the day too. If you’re interested in getting this product, or anything else from Medicube, check out the entire range available on their store!

Now, onto the review.

I’m back with the second part of my Early Picker haul! Finally. Actually, I received this package not long after I published my first one (and you’ve likely seen a post on my Instagram about this incredibly sample pouch that they have) but I’ve been spreading things out but trying to get super active with posting again. Now, with this post, the main thing that I really wanted to show everyone was their sample pouch (which you can see below) but I figured that I should touch briefly on these products that they sent me too!

These are the April Skin Turn Up Color Treatment; it is essentially like a temporary hair colour or toner, which adds a gloss to either prelightened (recommended) or natural hair. These are actually fairly common here in Australia, but I find that not many Korean brands actually have these sorts of colours – which is strange because I think a lot of people in Asia like to experiment with fashion trends! The main difference between this and the usual hair toner that I use is that it’s actually a treatment for you hair, so it leaves your locks feeling especially soft and healthy after use as well.

I currently have the orange colour in my hair and I’m waiting for it to wash out to test others – so I will be posting a review on that soon! Early Picker was wonderful enough to send me ten boxes of these; two of each colour variant, so I’ll be testing them all out and also experimenting with some colour mixing too! 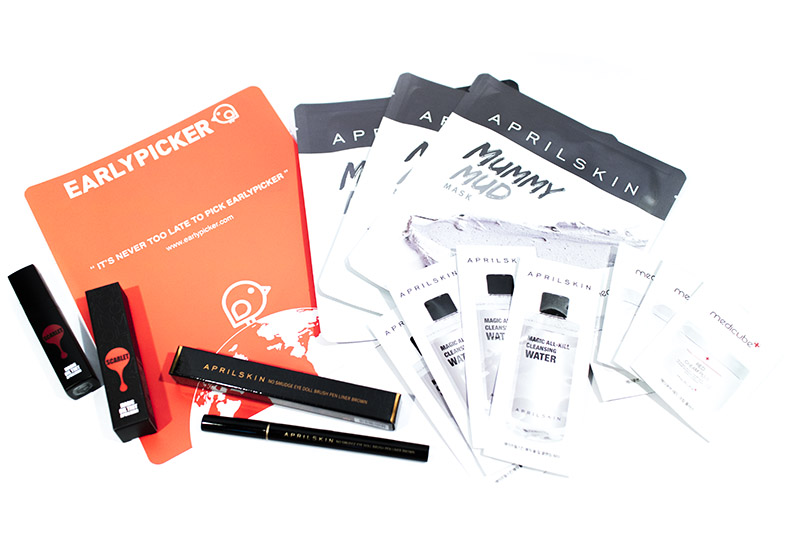 What’s the difference between synthetic and natu